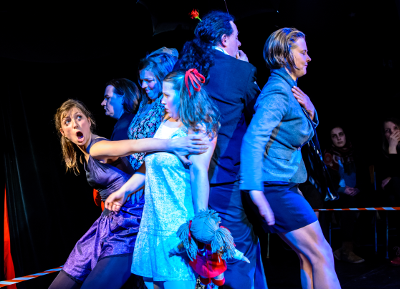 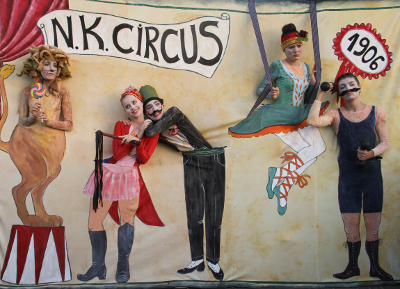 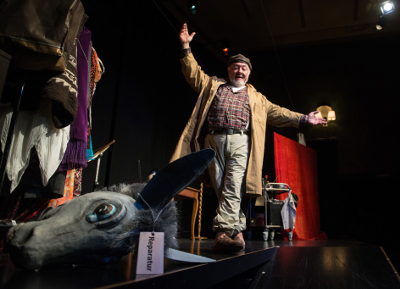 The finest hour of Josef Bieder 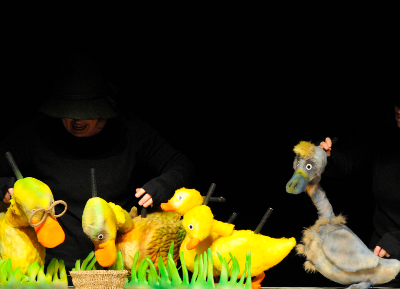 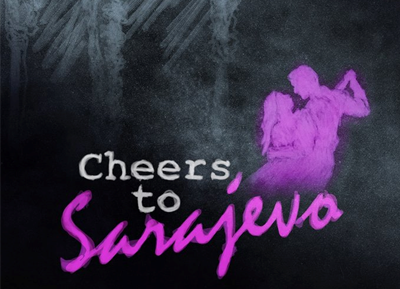 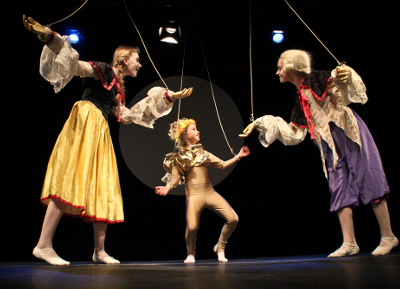 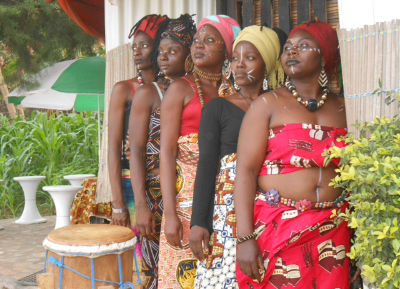 Cry of the Forest 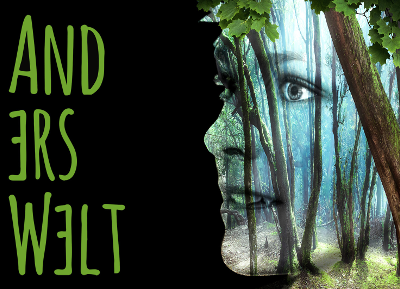 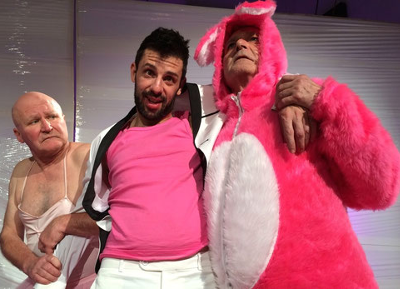 A woman is waiting for the bus at a bus station in London. Other people join her – a man, a
business woman, a boxer, a singer, a child and a gentleman. After a failed approach of the
woman to communicate with the others – based on the attempt to protect privacy – the strangers
finally enter into conversation: They show emotions, fear and longing.

The Berlin theatre group “The Wild Bunch“ (German: “Der wilde Haufen“) has been existing
since 1980. The young members of the ensemble are active in various productions besides
being part of “The Wild Bunch“. The style of the group is special: The theatre artists – about 25
people – stand back from spoken words and seek for motion, music and body language. “The
Wild Bunch“ has already been performing in several countries of Europe, South America and
Canada.

Instigated by his wife Mère Ubu, Père Ubu kills the Polish King and his family in order to come to
power. In doing so, he is encouraged by captain Bordure. The new King tyrannises the
population – this induces Bordure to set the Russian tsar Alexis against Père Ubu. Whereas the
acting King takes part in a crusade against Russia, the Prince of Poland overthrows the regent.
Do Père and Mère Ubu succeed in making an escape?

“Leikfélag Hafnarfjarðar“ has been existing for 80 years and is one of the oldest amateur theatre
groups in Iceland. The members have been performing on stage with two or more plays since
1983. In 2013 the Icelandic actors performed short plays which they had written on their own.

Circus/Kirkas
An old animated postcard on which a circus is illustrated comes to life. The persons portrayed
leave their previous two-dimensial world and enter reality. However, “real“ world does not seem
to be that easy as they have imagined.

Saucy Saucepans/Shir Hasirim
There are five mannequins that are left alone overnight. They have a try at cooking and soon get
to know that they act really clumsily. They are bad at cooking – but they are good at making noise.

TEEN STAGE is the central youth theatre in Jerusalem. The actors work together with
professional directors and learn how to pantomime, juggle and clown. Every year the young
group performs with classic and modern plays at Israeli festivals.

Franz Jägerstätter is an Austrian farmer in the Second World War. Being brave and resolute he
refuses military service for national socialists – knowing the possible fatal consequences. The
rural society reacts differently: His decision causes secret admiration but also misunderstanding.

Grenzlandbühne has been existing since 1998 in its current form. The summer theatre
days in Upper Austria are the child for the lay theatre group. They have been participating
in this event for 17 years – through this cultural event the actors became popular across the
borders of the province. The aim of the group is to offer a demanding popular theatre in its
original sense – according to the motto “from the region, for the region“.

The finest hour of Josef Bieder

Setting: a fully-occupied theatre. Actors: Josef Bieder, head property man. The talented actor
prepares the stage for a play on the following day. Suddenly he realises that the seating rows
are all occupied. Josef Bieder, an expert in opera theatre, makes the best of this situation: he
accepts the unusual closeness to his audience and starts to tell about his eventful life.

The R+R Theater, consisting of Ruedi Widtmann and Ruedi Meyer, was founded in Switzerland
in 2002. Their basic principles are highest precision, authenticity, lifeblood and exquisite quality.
To achieve this, the two Swiss actors only perform one- or two-person plays.

A ducks mother broods seven eggs – one of them is bigger than the others. After hatching all
little ducklings develop quite rapidly, only the seventh duckling struggles in finding its path. The
clumsy ugly duckling is being laughed at by its brothers and sister as it is different. It runs away
and passes several adventures – always aiming at finding its place in life.

The Slovenian group „Grajsko lutkovno gledališče Sevnica“ is specialised in puppet theatre.
For many years the group has been participating in the world’s puppet day festival as well as
in the summer plays in Croatia. The artists design their puppets themselves, give workshops and
direct plays for other puppet theatre groups.

Photojournalist Peter has lost his team. In order to find back to them again, he crosses the
Bosnian capital of Sarajevo. In doing so, he takes pictures of Mirela and Aleksander, a couple
whose love is secret. With the picture taken he blackmails Mirela to show him the right way back.
Suddenly the three find themselves in the middle of the Civil War in Sarajevo. Serbian
nationalism faces Bosnian culture and coincides with the basic form of all human interaction –
love.

The members of “Cheers to Sarajevo“ bring along different life stories. However, one thing unites
them: The passion for art and the desire to be able to live their passion creatively. The young
artists see (theatre) art as an “instrument” which is able to educate, entertain and strengthen
society.

The sheperdess Bastienne visits the fortune-teller of the village, Colas. She asks him for advice
as she fears that her boyfriend Bastien is attracted to another woman. Bastien also visits the
fortune-teller and informs him that he wants to ask for Bastienne’s hand. Colas, however, lies at
him and tells him that Bastienne loves another man. In his desperation Bastien is thinking of
suicide.

The senior theatre TARKA SZINPAD joined up with the children’s theatre COMMEDIA 2000.
They established the play together and it could be seen for the first time in 2015. Already in 2013
the creative children and adolescents participated in the theatre festival FOCUS.

The songs – sung and theatrically performed by the ADJAP Group – deal with the cultural
differences of the tribes in Africa. With the aid of rhythm and poetry the five women ask
themselves questions on the extensively varying identity, the secret of life and humanity. The
message which is being carried through all songs, is dynamics and faith – characteristics which
they see as the true “art“ in Cameroon.

The ADJAP Group consists of women of the whole Cameroon, accompanied by a director and a
designer. They create a show with a drum set, traditional African instruments and a dance. This
show is based on the interaction of creativity and free ideas. They aim at bringing closer the
African way of life to people of different cultural environment. They create a very special access
with their music and dance.

The daily trot controls a young woman. By meeting another person she gets access to a very
different world. She enters a world in which she finds parts of her soul of which she has thought
that she had lost them a long time ago. The young woman starts a journey through the new
world which still remains connected to reality: She finds these parts of her soul again which she
has missed – vitality, love and trust.

WAMCO – West Austrian Musical Company – was founded as a school project 30 years ago
and is a fixed component of the theatre landscape in Vorarlberg. There are 25 adolescents who
are involved in this musical club – a showcase project of committed youth work and youth
participation – from all regions of Vorarlberg. The actors and singers have already produced 50
professional musicals.

When the story “Auguste Bolte” by Kurt Schwitters is on programme, we look back to an era in
which artists ran against politics and the petit bourgeois spirit and thereby counted on absurdity.
There is as much to laugh as to think, the story, which may only end in a moving theatre evening
when read, addresses the act of decision during which we recognise that the scope cannot be
estimated anyhow.

Auguste Bolte observes ten people on the road who walk in the same direction. The conclusion
leads to the greatest and absurdest chases of world literature and at Wagabunt to a fast-paced
ensemble piece.